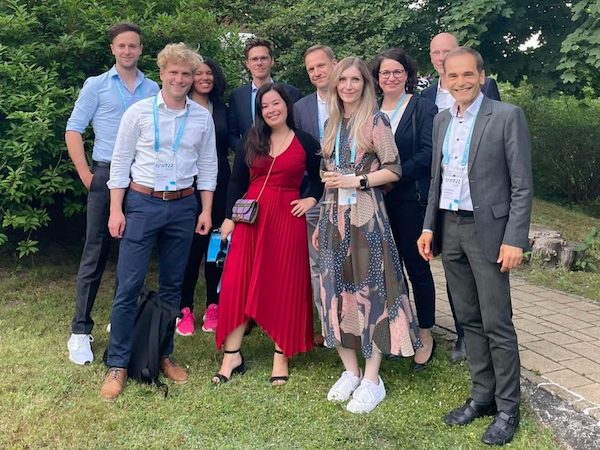 Face-to-face networking has been lacking – that’s why we currently value on-site events very highly. In May and June of this year, personal networking picked up again. We at Polytives not only perceived this positively but also made active use of it at a number of high-profile events (e.g. the “East German economic forum”).

Exactly one month ago, our CEO Viktoria Rothleitner was first a guest in Hamburg at City Hall. As part of Thuringia’s presidency of the Bundesrat, a series of events was launched to bring Thuringia into an exchange with other German states on various topics. Under the topic of the presidency “growing together”, personal networking in the form of a panel discussion followed by a get-together was used to discover existing common ground and learn from each other. On this occasion our CEO was part of the panel and spoke with other founders and stakeholders about, among other things, the current situation for young startups overall as well as some of the advantages of starting a business in Thuringia.

The result was an exciting exchange between the panelists:

…and the wonderful moderator Diana Huth who has also founded a company herself.

And once the journey to beautiful Hamburg has been made, it makes sense to take full advantage of the opportunity for personal networking. For this reason, Polytives visited the team of port F last month. Port F is an initiative of the Feddersen Group which is looking for fellow campaigners under the motto “transforming together” in order to make “common cause for the big picture”. Clearly, this appealed to us and we are very happy about the networking to Hamburg and we would like to expand it further because we can only solve the big tasks of our time together and with the help of innovation. For this, every networking point can support and we basically appreciate the openness towards us as a young company very much.

After these two stops in Hamburg, which were a wonderful start to personal networking for our CEO this year, the East German economic forum in June provided an opportunity for a direct continuation of the exchange. The “East German economic forum” event was dedicated to the topic of transformation. “We are shaping transformation” – a motto under which many inspiring contributions and discussions took place. In addition to experts from various areas of the economy, Federal Chancellor Olaf Scholz and Economics Minister Dr. Robert Habeck were also guests and answered the questions of the participants. Polytives will gladly be present again next year in Bad Saarow.

If you too would like to meet us in person again sometime don’t hesitate and get in touch with us!